Previous Next
A slaughterhouse worker’s confessions

Every month in the UK, approximately 100 million animals are killed for meat-but very little is heard of the people who die. A former abattoir worker here describes her job and its effect on her mental health.

Warning: Many readers may be upset by this story

I dreamed of becoming a vet when I was a boy. I imagined playing with mischievous puppies, calming frightened cats, and – as a rural child-checking the local farm animals if they felt the sun.

I dreamed of a pretty idyllic life for myself-but it’s not how things worked out. I ended up in a slaughterhouse instead.

I’ve been there for six years, and, far from spending my days making poor cows feel better, I was responsible for ensuring that around 250 of them were killed every day.

Whether or not they eat meat, most people in the UK have never been to a slaughterhouse-and for a good reason. They’re disgusting, nasty places. On the concrete, there are animal feces, the guts are seen and smelling, and the walls are covered in gore.

And the odor … When you first come in, it hits you like a wall, and then hangs thick in the air around you. The smell of dying animals encircles you like a vapor.

Why would anyone let alone work in a place like this, choose to visit?

To me, it was because I had already served in the food for a few decades industry-in ready-meal factories and the like. So when I got an offer to be a quality control manager from an abattoir, It felt like working directly with the slaughterers reasonably harmless career transfer. At the moment, I was in my 40s

. They’ve given me a tour of the property on my first day, explained how it all worked, and, most notably, asked me pointedly and repeatedly if I was OK. During the ride, it was quite common for people to collapse, they explained, and they were conscientious for the physical safety of guests and new starters. I thought I was OK. I felt sick, but I thought I was going to get used to it.

Yet I learned quickly that there was no point in pretending it was just another job. Not all slaughterhouses are the same, I’m sure, but mine was a harsh, unsafe place to work. There were numerous times where slaughterers would be kicked by a huge, spasming cow, amid all the spectacular techniques, as they hoisted it up to the slaughter machine. Similarly, the cows being brought in would get nervous and scream, which was also pretty scary for us all. If you’ve ever stood next to one, you’re going to know they’re huge animals.

I had no physical injuries, but my mind was disturbed by the environment.

As I’ve been in that day after day big, windowless box, my chest felt more substantial and more cumbersome, and a gray fog came down over me. My subconscious would torture me with hallucinations at night, replaying some of the atrocities that I’d seen all day long. 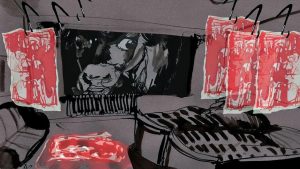 Disassociation is one ability that you learn when working at a slaughterhouse. With death and suffering, you learn to become numb. You break them into their saleable, delicious parts of the body instead of thinking about cows as whole animals. It doesn’t just make the job harder-for life. It’s important.

Nonetheless, some elements have the power to break the numbness.

There was a large skip at the end of the slaughter line, and it was filled with the heads of hundreds of cows. Every one of them had been flayed, extracting all the skin that could be offered. But there was still one thing connected-their eyeballs.

I couldn’t help but feel like I’ve been watching hundreds of eyes every time I walked by the hop. Some of them blamed me, believing that I had been complicit in their deaths. Others seemed to beg as if I could go back in time to save them in some way. It was gross, scary, and at the same time, heart-breaking. It made me feel guilty. It took all my energy not to scream the first time I saw those eyes.

I know stuff like that also bothered the other workers. I’ll never forget the day after I was at the slaughterhouse for a couple of Months of chopping one of the lads into a freshly killed cow destroy her-and the fetus of a calf fell out. She was pregnant. He began to shout and raise his arms at once.

To calm him down, I took him into a meeting room, And all he could do was, “It’s not OK, it’s not OK,” again and again. They were tough men and rarely showed any emotion. But I could see his eyes prickling with tears.

And, even worse than pregnant cows, we sometimes had to sacrifice the young calves.

The British Meat Processors Association (BMPA) states on its website that the UK meat industry has some of the world’s highest standards of hygiene and safety.

Many of its leaders are at the center, he notes. developing abattoirs with facilities designed to house the animals and help them move around the site with comfort and without inconvenience, discomfort, or misery.”

Meat manufacturing in the United Kingdom hires about 75,000 people, about 69 percent of whom come from the other Member States of the European Union, the BMPA reports.

“The obstacle to meat processing for British people is a desire to work in what is viewed as a challenging environment,” he says. “Most people find it difficult to work in their production while eating meat partly due to the obvious aversion to the process of slaughter, but also because it is a physically demanding role.”